The new Nikon Flagship D5 shoots in the Dark 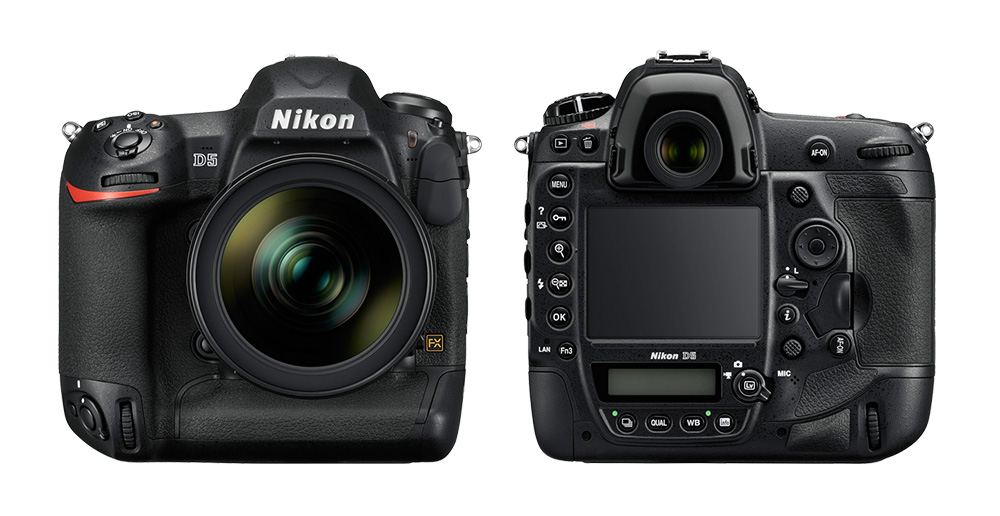 Everything about the Nikon D5 is new and much of it is remarkable technology and performance. They have redesigned the rugged D series workhorse and literally re-invented the DSLR. The features available in the D5 are unavailable in other DSLRs. Period.

They built an all new Expeed 5 image processor, which is low noise, high capacity and high detail.

They threw in an all together new AF system, (a Nikon First - Multi Cam 20k AF sensor, which offers 153, 72 and 25 selectable points), which employs 3 times the number of AF sensors as the D4s, added a 12fps high speed capture mode (boost to 14 fps in mirror up mode), swamped up the exposure modes with a new 180000 pixel RGB metering system (built in advanced scene recognition system), added genuine 4K UHD video capabilities and there, you have a camera that is a first and best in its class !

The legendary Nikon flagship ruggedness and longevity has just been extended. The D5 is capable of a half a million shutter cycles (Nikon claims 400,000), their AF system can now see at f/8.0 which is a full stop more than its predecessor, the extended buffer will let you shoot 200 continuous frames at 14-bit lossless in RAW+JPEG fine, and the new processor is ultra efficient with upto 3780 shots per charge.

The ISO range is from ISO 50 (Lo-1) to a humungous ISO 3,280,000 (Hi-5), giving the D-5 night vision. It can photograph in areas where the eye cannot discern. The D5 lets the user sequence the mirror in high speed mode to prevent missing a view while high speed shooting.

A new 3.2" 2359K XGA LCD touch screen enhances the replay and preview experience. The user interface has been streamlined to make image and video viewing a cinch. You no longer have to punch confusing buttons to view/zoom/replay. Instead, you can tap, swipe, pinch, expand to get the job done.

Professional Photographers, Photojournalists, Wild Life Photographers, Action Shooters, Sports Photographers, film makers can all revel in the new found capabilities with the Nikon D5. Their gamut has just expanded to be able to shoot in low light and high speed and they can all look forward to making pictures in territories where they have not ventured before.

Nikon has also launched Snapbridge which is a blue tooth device built into the camera for instantly sharing images with smart phones/devices. They have also launched a new radio controlled flash unit, the SB 5000. It can operate at a maximum distance of 30 meters without line of sight and you can club 18 of these speedlights for advanced wireless lighting using the Nikon WE-R10 commander module on the D5 and the SU-800 as flash master.

You can also transfer images wirelessly using the new WT-6A wireless transmitter at 130 mbps to a computer or server. When in HTTP mode, you can shoot via Live View and operate camera controls.

The Nikon D5 is all about balance and confidence. Confidence that the camera will never ever let you down and actually give you more than you expect.

The D5 balance is all about the right sensor dimensions, right Processing engine, right AF system, right camera performance all synergising to give you the most exacting performance under the most demanding conditions. Nikon will launch the D-5's baby brother the D500 along with the D5 in March 2015. The D500 comes with a slew of new features and will carry forward the legacy of the Nikon 300 series. As with previous Nikon ranges, the D500 will draw upon a lot of features from the flagship D5, and will present more photographic potential to the DX shooter.

The Nikon flagship Image, like the D4s for instance, is magical. Such a delicate blend of tones, colours and contrast that all looked very natural. Something the D800 and the D810 could not match. This image quality was evident in the Nikon Df (which employed the D4 chip). Low noise, smooth as silk, fine detail with the Nikkor lenses. Talking of Nikkor lenses, Nikon is building lenses for every category of photographer there is. Across a wide price/performance range. But there is one Nikon Legacy that says it all. Many of their manual focus lenses made from the previous century (seventies) still work just fine with the Newest Flagship, the D5. This speaks volumes about Nikon's commitment to its customers and foresight in camera design.